phil in the spaces

dribblings of a kid in an old man's body

Science Fiction or Medieval Fantasy: Star Wars VS Lord Of The Rings

Many argue that science fiction is better over medieval fantasy, or that medieval fantasy is better than science fiction. Some would argue that medieval fantasy better shows man’s struggle against evil rule of the land, due to the lack of technology to aid in that struggle.   Others argue that technology aids the underdog in triumph over that which plagues the era. Although the world of J.R.R. Tolkien’s Lord of the Rings has remained in popular culture for generation after generation, the world of George Lucas’ Star Wars has mirrored Lord of the Rings with its formula for defeating the greater evil, its internal struggles of the main characters, and its developing character relationships. 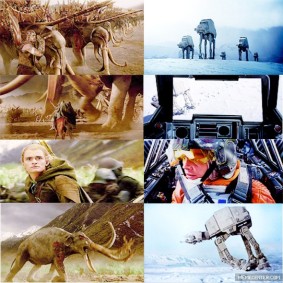 Beloved by millions long before its introduction of the movie screen, Lord of the Rings stands iconic to the genre of medieval fantasy. Having now been brought to the big screen, it shows one overbearing, powerfully feared creature, Sauron, plotting to rule the world of Middle Earth, only to be defeated by a small “fellowship” of unlikely allies, invoking hope in the viewer, as well as removing the sense of insignificance of the “little people”.   During their quest to defeat Sauron, the dark king of Mordor, Frodo, the smallest creature of the fellowship, must overcome his own lack of self-confidence, due to his size. Likewise, Aragorn, must deal with the past of his people in order to overcome his lack of self-confidence in order to take his rightful place of king in the world of the men of Middle Earth. Throughout the storyline, the viewer witnesses relationships grow between the most unlikely of characters. Events in Middle Earth history has deemed elves and dwarves mortal enemies, however, the strongest of bonds are formed between Legolas, a woodland elf, and Gimli, son of Gloin, a prominent figure in dwarfen lineage.

Since its introduction to popular culture in the 1970’s, the world of Star Wars has delighted generation after generation. The process of defeating a looming evil, greater than its main character, gives the viewer a since of belonging and importance. This evil derives itself from one being’s drive to conquer and rule the universe. Training Anakin Skywalker in the ways of The Force, Emperor Palpatine has aspirations of ruling the galaxy while a small rebel alliance conspires to defeat this overpowering dark evil. Meanwhile, the movie focuses on a handful of main characters that must overcome personal issues in order to succeed in their contributions to defeating the looming evil. Luke Skywalker must confront his lack of self-confidence to take his role as the hero, while also accepting the role his own father has taken to bring upon the galaxy the evil that threatens everyone. To aid in overcoming the inner struggles of the hero, other characters are introduced through which lasting relationships are formed. Luke befriends two unlikely heroes, Han Solo and Chewbacca; smugglers by trade, scoundrels by reputation. In the end, the bond formed by their developing friendships leads Han and Chewie to make a decision contrary to their reputation: They return in a nick of time to turn the tide and help defeat the looming evil.

So, while Lord of the Rings has risen to take it’s place next to Star Wars in “geekdom” culture, due to it’s theatrical release, they are not as different and as they may appear from the outside. Both will live on as the example to follow in the writing of science fiction and medieval fantasy. Some will continue to argue one over the other; both prove to provide the reader or viewer with the same encouragement and enthusiasm to live their lives in hope and passion, maintaining relationships with those that are closest. For, it is through unlikely character relationships and heroes overcoming inner struggles, that both worlds show the viewer or reader the same formula for defeating any powerful, looming evil.